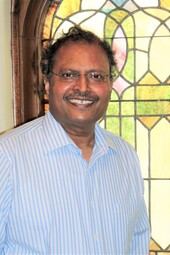 Stanley Bhasker has been serving as an ordained minister of Word and Sacrament since 1988.  He has served in Presbytery of Geneva, Huntingdon Presbytery and Rockstone Presbytery before moving to Brookville Presbyterian Church in May 2021.

Mission has been a vital part of Stanley's ministry.  He has organized and led several mission trips with young people and adults to distribute food and clothes to the homeless people with Midnight Run volunteers in New York City, to help rebuild homes and churches after hurricanes Katrina and Ike in Texas, to build schools, churches, and help install safe drinking water in India, to organize mission partnership between Evangelical Presbyterian Church of Sudan and Redstone Presbytery, and to help build a Community/Church center with Presbyterian Border Ministry at Aqua Prieta, Mexico.  He helped raise money to remove landmines in Africa.  Currently, he is helping to build a church building in a remote village in India.

Stanley Bhasker was born and hailed from a Christian family in Chittoor, a medium sized town in the state of Andhra Pradesh, India.  He attended Christian Mission schools, Beattie Memorial and Sherman School until 7th grade and continued his education in public school, college and university.

Having received a Bachelor of Arts degree in English, Economics, and History in 1981, Stanley served as a Community Organizer/Social Worker to help the outcast people of remote villages through Church's Auxiliary for Social Action (CASA).  Working with the rural people to help improve each family's economic and social advancement proved to be difficult and challenging, but it was rewarding.  After serving for two years, he felt the call and went to Leonard Theological College for theological studies, and received his Bachelor of Divinity in 1987.  He earned his Master of Arts in Economics from Sri Venkateswara University in 1989.  With a great interest in the Old Testament, he came to the United States to do his doctoral studies under Dr. Norman Gottwald, the author of Tribes of Yahweh, and completed his Doctor of Ministry degree at New York Theological Seminary, New York in 2002.

He wrote his thesis on the "Symbolic Implications of Blood in the Pentateuchal Tradition" for a Bachelor of Divinity degree, and "Indians for Christ:  Tamil Christian Congregation" as a demonstration project for the Doctor of Ministry degree.  Stanley received the Andrew Murray Peacemaking Award from the Synod of Trinity for his work with the Indian community in Maryland, Washington DC and Virginia.  He received three awards for Academic excellence, Homiletics, and Advanced Hebrew at Leonard Theological College.  He successfully completed Executive leadership at McCormick Theological Seminary in April 2018 and presented a capstone project on "Small Church Network:  Empowerment and Leadership Development."

Stanley has been actively involved in the community through several projects such as Food Bank/Pantry, Soup Kitchens and Meals on Wheels.  His interest in communal relationships and ecumenism led him to be active in the local ministerium ecumenical activities.  Being a student of religion, Stanley taught major religions at the Synod School, ministerium sponsored Lenten studies and local churches.  He is currently serving as a member of the General Assembly Special Committee on Racism, Truth and Reconciliation.  His involvement in the local ministeriums, presbyteries, Synod, General Assembly, National Council of Churches of Jesus Christ (NCCC) and Interfaith Relations Commission of NCCC enriched his ministry, mission commitment and leadership skills.  He led the Small Church Network of Presbytery of Geneva as a co-moderator to encourage and energize small congregations to address the real needs, use people's gifts and talents, prioritize programs and resources in line with church's purpose and goals.  He served in the Committee on Ministry of Presbytery of Geneva and Redstone Presbytery.  Currently, Stanley is moderating New Bethlehem Presbyterian Church and Edenburg Presbyterian Church, Knox, PA.  He is also serving in the Outreach Commission of the Presbytery of Kiskiminetas and Self-Development of People (SDOP) in the Synod of Trinity.

Stanley has been a certified Transformative Mediator working through Center for Dispute Settlement, Bath, NY.

Stanley is married to Sarah and blessed with two sons, Andrew and Clifford.