The Brookville Presbyterian Church has an adult choir which  varies in number from 12 to 15 voices. We sing four part music and sing every  Sunday in the  worship service from September to June, and also for special  services
throughout the year. Everyone who loves to sing to the Lord is welcome to join.

The church also has a three octave handbell choir which meets on a less structured basis. Substitute ringers are always needed.

Music is a big part of  our worship service, and we welcome  anyone who would like to join us in this beautiful way of praising our Lord.

In 1861 the church obtained a 'harmonium', which was later called "Reed" or Cabinet Organ.  The first pipe organ was installed in 1884.
A Moller organ was installed in 1908.  Upon the completion of the installation process John A. Bell of Pittsburgh performed the inaugural organ recital in the spring of 1908.  In 1951 the organ was rebuilt, using many of the original pipes.

Steinway& Sons produced this 7 ft 3 in Model C Rosewood instrument in New York City in 1885.  The keyboard features 85 keys, rather than the 88 keys found on standard instruments.  The piano was sold to a private customer and found it's way to the Brookville Presbyterian Church in 1898.
In 2010 a visitor who was well acquainted with Steinway instruments informed the staff that this particular model with the reduced number of keys was a rarity. 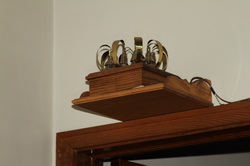 Bach is reported to have written music calling for Zimbelstern and to have used the Zimbelstern during his many years as a church organist.  The instrument provides a brilliant voice to devotional works.
The word Zimbelstern means "cymbal-star" and the first instruments were indeed made in the shape of a star.
The organist controls the Zimbelstern by way of a small keyboard mounted on a bracket behind the organ bench.